Home » Children's Hearing » Are your child’s toys causing them hearing loss or damage?

Are your child’s toys causing them hearing loss or damage? In today’s world of constant over-stimulation, children’s toys have evolved from rocking horses and pull toys, to advanced technological gadgets equipped with all kinds of bells and whistles designed to spark your child’s imagination, educate and delight them, and keep them entranced for hours. The problem is that many of these fancy new toys could be causing your child hearing damage, and in extreme cases, even hearing loss.

Hearing loss is cumulative, developing gradually as we age, and noise-induced hearing loss is permanent and not currently curable.

So it’s critical that we start protecting children’s hearing from an early age. Are your child’s toys causing them hearing loss or damage? Image via livescience.com

How loud is too loud?

Unprotected exposure to sounds above 85 decibels (dB) for a prolonged period can lead to hearing impairment. And the louder a sound is, the less time it takes to cause damage.

So how loud does a toy have to be before it is considered dangerous for your child? To put it in perspective, the average conversation is about 65 dB loud, but some toys emit sounds that are more than 100 dB. For example, when used in ordinary play some types of battery-driven toy guns and action figurines can create noise levels between 100 and 140 dB, equivalent to the noise generated by a motorbike, a rock concert, or a jet at take-off. 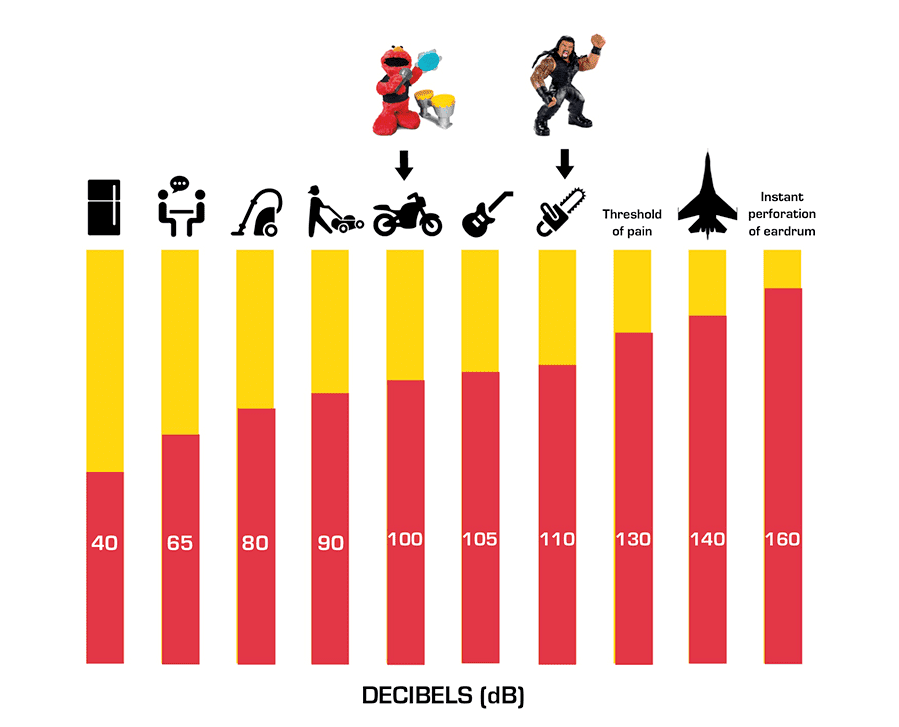 Protect your child’s hearing: Some toys are emitting noises as loud as chainsaws.

And that’s assuming that your child is using the toy the way the designers intended for it to be played with. Toys are generally noise-tested at a distance of a child’s arm length; approximately 25cm. But if you watch a child playing with a hand held noise-emitting toy you will see them hold it close to their face, right next to their ears, which increases exposure to more than 120 dB of sound. As children are very sensitive to loud and high-pitched sounds, toys this loud can cause physical pain to some kids.

Which toys are too loud?

Each year the American Sight & Hearing Association (SHA) prepares a Noisy Toys List in time for Christmas, to help parents and caregivers make informed decisions about gift choices. Their most recent list, published on 24th November 2016, found 3 toys that were so loud they could cause hearing damage within 15 minutes of play time. The worst offender was the WWE 3-Count Crushers, Roman Reigns™ action figure by Mattel®, which was found to produce groans and growls that reach 104.4 dB. Other recent list-toppers include Road Rippers Lightning Rods, Let’s Rock Elmo and the I Am T-Pain musical microphone.

How can I protect my child’s hearing from noisy toys?

There are several free smartphone apps available that allow you to take a rough measurement of decibel levels. The apps are limited by the phone’s ability to pick up the sound, and they usually cap out at 100 dB. So if the app can’t pick up the audio from the toy, that toy is too loud for your child! Decibel 10th is a highly-rated decibel meter available on iTunes and Google Play. 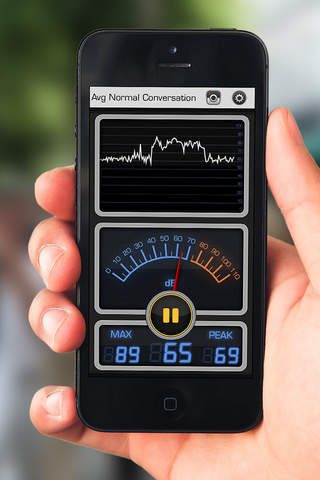 If you don’t own a smartphone, your ears will do the job just as well. Rule of thumb: if a toy sounds too loud to you, it is too loud for your child.

Other tips when choosing toys